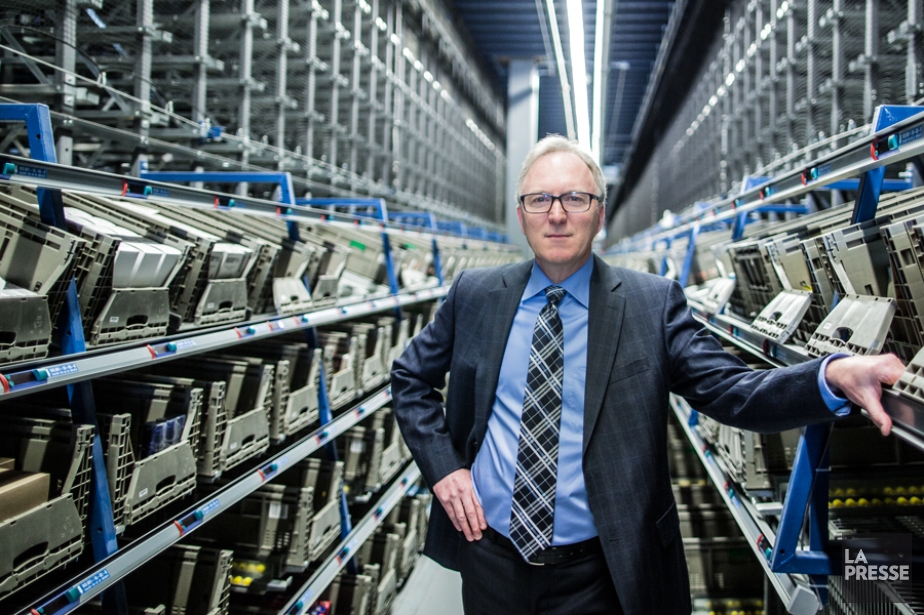 Yves Bigaouette runs the RSC in Terrebonne, Que. The facility is setting records and is ranked in the top 3 worldwide among WITRON users globally.

The huge commitment that Sobeys has made to serving Canadians from coast to coast requires an equally impressive supply chain to back up that promise. It isn’t enough to have big warehouses. The logistics of moving product across the country requires innovation and bold thinking.

Distribution has changed unimaginably in the 110 years since Sobeys started out in rural Nova Scotia, but one thing that hasn’t changed in all of that time is Sobeys’ commitment to bringing great, fresh food to every customer across the country.

The nature of the retail grocery business is still simple, says Eric Seguin, Sobeys Senior Vice-President, Distribution and Logistics. “The moment of truth is when people go grocery shopping. The customer wants to be able to find what they are looking for. It has to be fresh.”

The store, he says, is the “main stage of the business.” That makes the behind-the-scenes distribution network — including the men and women who get product on shelves to give customers an outstanding shopping experience — the critical backstage.

That’s why Sobeys is investing so heavily in the supply chain — and in the future — by building a simplified, efficient supply chain for more than 1,500 Sobeys and affiliate stores. Sobeys first opened the $150-million fully-automated Vaughan, Ont., RSC followed by the RSC in Terrebonne, Que., while the new Rocky View RSC in Alberta will serve the West.

As a measure of its commitment to Canadians, Sobeys is the only retailer in the country to use this technology.

With a $168-million investment, the Terrebonne facility replaced two existing RSCs in Quebec when it started shipping in January 2013. The challenge was huge: build a fully-automated single delivery and distribution point for grocery and tobacco products in Quebec and New Brunswick.

There were, naturally, the inevitable technical issues. As well, efficiencies had to be found and organizational synergies created.

As much as anything, the Sobeys team had to work around the clock to master WITRON Integrated Logistics’ world-class technology.

But the hundreds of Sobeys employees rose to the task in a way that Eric Seguin says demonstrated the team’s “resilience and force of character.”

That’s obvious to anyone who enters 470,000 square-foot Quebec facility. Thirteen million pounds of steel went into the 70-foot-high building which features 64 dock doors — 28 for receiving and 36 for shipping — and houses 12,000 different Sobeys products.

But it’s the efficiency — the improved quality of service — more than the scale that impresses. WITRON’s automated system is setting records for accuracy and speed of delivery. Terrebonne RSC ranks in the top three of WITRON’s 50 projects across the world in terms of efficiency and contributes to the training for new WITRON employees, which the company brings from far and wide to Quebec.

Since it opened, some 4,000 people outside of Sobeys and from around the world have visited Terrebonne to see it in action. The reason: Terrebonne has quickly become the gold standard for other companies looking to automate distribution.

The level of automation also means the RSC is adaptable enough to meet the needs of any store. For example, pallets are loaded in a way that takes into consideration each store’s configuration, ensuring for instance, that since chips and soft drinks go on shelves in the same aisles in all Sobeys stores, they are packed on pallets that way at the warehouse, meaning unpacking is swift and efficient at the other end. Other products are packed according to each store’s configuration.

The leadership based on collaboration and partnership between our suppliers and our employees contributed to the achievement of a common goal: more than one million cases and units shipped weekly out of Terrebonne’s automated warehouse.

While the process is automated at Terrebonne, Vaughan and Rocky View, it’s the Sobeys employees behind the scenes who are making these world-class facilities a success. At Sobeys, bringing great food to customers has been at the very core for 110 years.