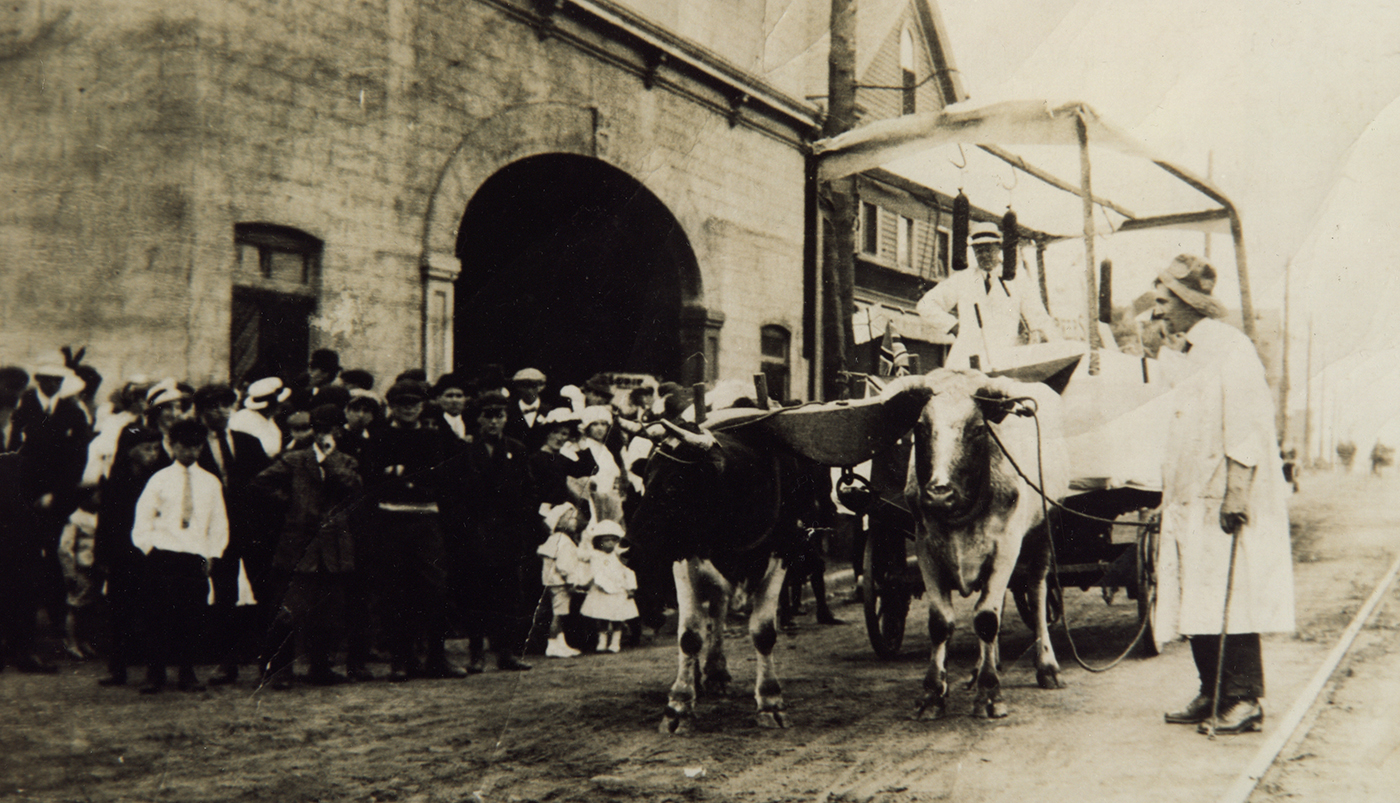 The Sobey Wall of Honour at the Canadian Museum of Immigration at Pier 21 is perhaps the most broadly encompassing of all the philanthropic legacies of The Sobey Foundation.

J.W. Sobey, dressed in white and with a hand on his hip, stands proudly on a covered wagon. Cured meats hang from the inside frame and a pair of oxen are hitched and poised to move forward.

A crowd has gathered alongside the road to watch the wagon and other participants in the community parade through Stellarton, Nova Scotia, in 1907.

Among the crowd that has gathered to watch the parade is a little girl. Dressed all in white, the girl has a front row spot from which to view the procession. Unbeknownst to her, it is also a front row to history.

Viewed from 110 years out, J.W.’s idea was simple: deliver good food to neighbours. The idea, however, was hugely innovative at the time. Thanks to J.W. Sobey, the little girl at the parade along with her family and neighbours would soon be able to rely on getting fresh meat, sourced from local farmers, processed safely and delivered promptly.

But more than the profound impact that J.W. Sobey would have on the Canadian grocery business, the photo also represents one of the values at the very core of Sobeys: Proudly Serve Our Communities. Because of this commitment, countless Canadians have benefited both directly and indirectly from the Sobey family’s philanthropic work.

The Sobey Foundation, founded in 1982 by Frank H. Sobey and his three sons Bill, David and Donald, is committed to improving the lives of individuals through investments in health, education and community. Although the Foundation works with organizations across Canada, it primarily supports organizations whose activities make a difference in Atlantic Canada.

The Frank H. Sobey Awards for Excellence in Business Studies began in 1989 to support the development of future business leaders and business programs in Atlantic Canadian

Universities. Since 1989, more than $1,500,000 has been awarded to business students in Atlantic Canada.

Maximizing positive outcomes in the lives of individuals and communities is at the heart of the Sobey Foundation’s philosophy. The impact of the foundation’s work extends far beyond the borders of Atlantic Canada, reaching Canadians across the country.

The Sobey Wall of Honour at the Canadian Museum of Immigration at Pier 21 is perhaps the most broadly encompassing of all the philanthropic legacies of The Sobey Foundation. More than one-million immigrants passed through the doors of Pier 21 between 1928 and 1971 on their way to a new life in Canada.

The historic site on the Halifax waterfront has been restored and preserved thanks in large part to the work of The Sobey Foundation. It is here, spanning the full height of the museum’s red brick walls, that Canadians can pay tribute to their own journey or that of their ancestors by adding an inscribed metal brick to the Sobey Wall of Honour. These bricks, along with the stories collected in the museum’s archives, tell the story of Canada and of the Canadians who helped build this country.

The Sobey Foundation’s support of the museum is borne out of admiration for the immigrant experience, no matter where it played out. It is also fuelled by a desire to create an extraordinary storybook for all Canadians that celebrates our shared history.

Celebrating the cultural fabric of our country and preserving our collective heritage is at the core of the Sobey family’s philanthropy. Saving the stories of our nation means that we can look back and recognize when history was made in front of our very eyes. Much like it did in front of that little girl in white watching an oxen team pull a meat wagon during a community parade in 1907.